In both ancient and recent times, the Kaelepulu estuary supported fishing and harvesting for local communities.

“Kaelepulu Fishpond. Once upon a time, it was much larger and very clean. The people of that locality always saw to it that the ponds were kept clean in the olden days. Fat mullet, awa, ahole, and oopu fish were found there and much limu kala-wai. This limu was eaten with fat fish and much liked with awa fish. The fish were tender and always fat. Bullrushes (akaakai) grew around the edge of the ponds and Mrs. Alona remembered going with her grandmother to gather the leaves.”

“I lived in the 30s and 40s on the banks of Kaelepulu Stream near Kaelepulu Fish Pond and also next to the now Buzz’s Steak House where it once was a beach cottage. At the upper Kaelepulu Stream home, my uncles used lay nets to catch the mullet, etc. I remember going out on a rowboat to look at the native wetland birds in the bulrushes. At Kailua Beach whenever there was heavy rain, the sand berm was opened and we would lay nets on the narrow outflow channel to catch o‘opu. We also used scoop nets to catch the opae and aholehole along the grassy stream banks which no longer exist.”

Kaelepulu wetland serves as a nursery for many of the larger fish found in the pond and canal. These are a few photos of fish in the wetland and fishing in Kaelepulu Pond and the canal.
Note: Fishing is not permitted in the wetland, which is a dedicated conservation area.

Click on the any image above to enlarge it.

Estuaries around the world are known for their ability to act as fertile fish nursery habitats. The salinity and nutrient gradients in estuaries create a variety of habitats that enhance the growth of plankton and small invertebrates, which in turn serve as food items for juvenile fish. Healthy estuaries support healthy nearshore fisheries.

Kaelepulu is an estuary and displays a gradation of salinity from freshwater at the incoming stream mouths to near full-strength seawater at Kailua Beach where it enters the ocean. Fish of recreational importance in the Kaelepulu estuary include barracuda (kaku), jacks (ulua, papio), mullet (ama`ama), milkfish (awa), leatherback (lae), gobies (o`opu), and blacktail snapper (toau). The most abundant fish in the estuary is the introduced tilapia, with other introduced species including mollies and mosquito fish common in areas with lower salinities. Fishing is allowed in the Kaelepulu and Kawainui Streams. Throw-netting is popular when the stream mouth is open on an outgoing tide. Catch and release fishing is permitted within the body of the 89-acre pond by residents of the Pond. No fishing is allowed within the boundary of the 14-acre Kaelepulu wetland.

Some of the fish found in Kaelepulu

The barracuda is one of the top-level predators in Kaelepulu. Adults with a length of 3-feet weighing 20 pounds are common in the pond with individuals up to 6-feet and in excess of 100 pounds having been recorded. Adults (> 2 ft) are broadcast spawners with fertilized eggs and larvae becoming part of the plankton community, but it is unknown if they successfully reproduce within the estuary. The life span is estimated to be 14 years. Their diet in the pond likely consists primarily of tilapia, although they are known to consume a wide variety of prey, including smaller barracuda and ducklings. From the raised shoreline surrounding Kaelepulu pond and wetland, large barracuda can have the appearance of a sunken tree branch slowly drifting with the current….. until they strike with a lightning-fast sprint and splash. Kaku are intelligent predators known to work in tandem with other predators (including humans) to hunt and corral prey.

Jacks are a relatively new member of the species mix within the Kaelepulu system with only a few being captured annually, primarily in Kaelepulu Stream, prior to 2015. Jacks, like barracuda, are apex predators, but often hunt in small schools. In 2016, a large cohort of juvenile jacks (6-8”) began to be seen throughout the estuary and up into the wetland. As jacks are broadcast spawners, it is likely that a quantity of recently fertilized eggs was drawn into the estuary from Kailua Bay when the stream mouth was open during the spring of 2015. By late 2017, individuals up to 14-inches were being captured. In 2020, a kayaker reported his hull being dented by a jack (ulua) about 3-feet in length.

Milkfish (Awa, puawa; Chanos chanos) are often abundant in the pond and feed off of the benthic algae (ogo) so prevalent in the pond and wetland.  Commonly reaching lengths of two to three feet these bright silver fish travel in large schools and can occasionally be seen jumping clear of the water when frightened by predators or kayaks. Difficult to catch by hook and line because they are vegetarians, these fish are often the focus of throw-net fisherman at the mouth of the stream. When the stream mouth is open and flowing to the ocean, adult fish (awa) will race through the channel to the open waters of Kailua Bay where they will breed, releasing their eggs and sperm into the ocean. Juvenile fish (puawa) are strongly attracted to freshwater and will swim into the Kaelepulu stream mouth when it is open to flow. The video below, shot by Bob Bourke, shows the milkfish in the shallow water of the wetland. 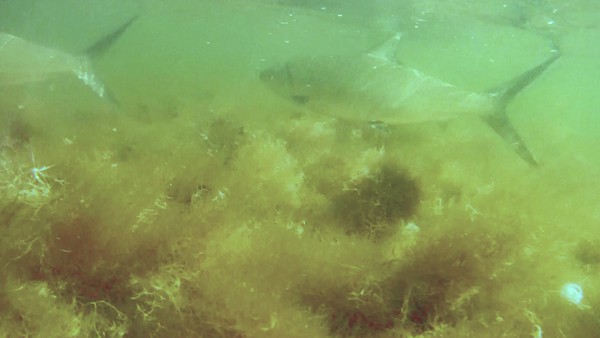 Kaelepulu has been known as prime mullet habitat since the time of the Hawaiian kings. Mary Kawena Pukui quotes a Hawaii legend saying that “Ulanui, the celebrated foot-runner, was said to be able to carry a fish by way of Waialua to Waikiki while it was still alive and wriggling.” “The mullet is and was the most important freshwater, or brackish water, fish of the Hawaiians.” Mullet up to about 16-inches in length are abundant in the pond – particularly in the less saline waters of the wetland and storm drain inlets. Juveniles (<1-inch) feed on zooplankton, with adults detritus, algae, and benthic invertebrates. Adult fish that migrate out to sea through the stream mouth are targeted by the throw-net fisherman at Kailua beach.

Several species of tilapia were introduced to Hawaii to control aquatic vegetation and as baitfish. They failed on both accounts, but have successfully interbred and spread to virtually every brackish water, and many freshwater habitats in Hawaii. Tilapia are the most abundant fish species in Kaelepulu. They are omnivores, capable of growing even by filtering plankton from the water, but also voracious predators of invertebrates and smaller fish. They do not grow large or fat in the estuary because they divert most of their energy to reproduction. Tilapia can survive low oxygen conditions that are fatal to other species by breathing from the surface film of water. Often in the mornings when oxygen levels are at their lowest, thousands of tilapia can be seen sucking air from the surface of the water.

An interactive aerial view of the wetland showing the waterways. You can navigate with your mouse or with the control buttons at the bottom. The button on the right will show the photo full-screen.

Due to siltation, primarily from upstream development, water levels in the wetland have dropped considerably. This is also an interactive photo, click-and-drag to look around.